This is a bad? news for SharePointers out there which still has a good news inside as well ;). who’s going to deploy SharePoint 2010 on Windows Server 2012? Keep a note below.

The Bad News Is – As per Microsoft SharePoint Server 2010 does not compatible with Server 2012 platform and we have to wait till the SharePoint 2010 SP 2 released which will contain the patches and updates accordingly.

And here’s The Good News -Yes We have an workaround for this.

Though MS says that we have to wait till the SP 2 released, I cannot because somebody is waiting for the solution out there and there’s no excuse for it, couldn’t revert back my Server in to 2008 R2 as well. So started dig down in to a workaround and got finally SP 2010 on Server 2012 installed and configured nicely, Tons of thanks for the web community who Shares their experiences all over the world for others (I’m community a Lover…)

So, From the point of prerequisites preparation you will get below issues.

1. Prerequisites installer gives an incompatibility pop up (still you can go ahead by saying ‘Run Program without Help’) 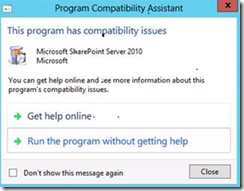 2. Even Though you have got all prerequisites Installed either manually or through a script, SharePoint Server Installer still says ‘Windows Server Roles or Features required by this product are not Enabled’.

3. Let’s say you have passed all above barriers somehow. Still you get some other issues after installing and provisioning the farm.

3.2 Local Farm Not Accessible via PowerShell. Again the compatibility issue.( "The local farm is not accessible. Cmdlets with FeatureDependencyId are not registered")

Let’s see how we can get this done and here are the workarounds you have.

Note : None of these workarounds are officially supported by Microsoft and still the best solution for now is to have SharePoint 2010 on Windows Server 2008 R2.

If you are Installing SharePoint server 2010 on SQL Server 2012, make sure you have the media which has SharePoint 2010 SP1 included. None SharePoint SP 1 doesn’t support SQL 2012.

Workaround 02 – Get everything manually prepared your self (Time consuming but interesting !)

I didn’t go through the above PowerShell script as I needed to know each and every points basically what we fix and where. So here are steps with detailed descriptions on the manual workaround which worked for me.

Go Forward and select Windows identity Foundation 3.5 for .Net framework 3.5 under features. It’s good so you don’t have to download It anymore as Serer 2012 contains the feature out of the box.

Below List of services need to be selected under IIS Role. 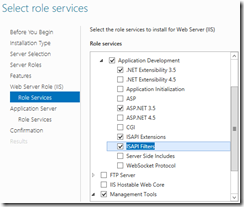 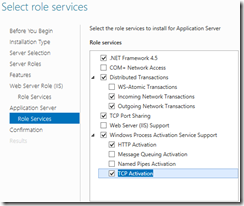 Go ahead and install them and that’s all from the Prerequisites side.

Boom ! You wont see that error now. So Go ahead and get the product installed.

Once you complete the installation you will notified for product configuration wizard. Go ahead and get your farm configured. End of the wizard, again the next issue will pop up. Yes the issue number 3.1 which I have mentioned above, ‘Configuration failed’. This is because SharePoint 2010 needs .Net farmework 2.0 in IIS App Pools.

At this stage, all the app pools and sites has been created under IIS. Let’s go there and have a look. Yes they are !

Now Run the Product Configuration Wizard again and it should complete successfully. 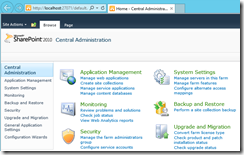 Note: This will not uninstall version 3, it will simply launch a new powershell instance that uses version 2. 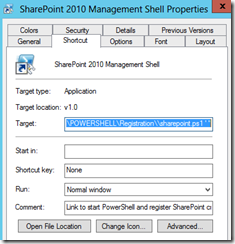 Let’s go and try now. Yeah Now the Shell back to Rock !!

Everything on it now.. Enjoy,

Create a New sub Site Option has been taken in to site Content in SharePoint 2013 New UI. previously it was on site actions. it took few minutes for me to find out at the very first experience of SP 2013 Preview.

Follow these steps to get a new site created. 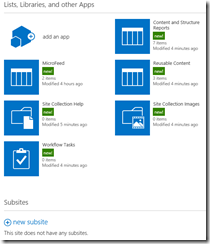 Recently I got an Clustered SQL 2012 environment created with two nodes as I needed to deploy SharePoint 2013 on it. SharePoint Installation gone well but I got below error when I’m tying to create a new web application.

tried though SQL Management Studio to create a new DB in order to verify and it gives the same error. so it should be from SQL cluster side for sure.

anyway, we love these kind of little damns because always we learns something though them. let’s find out what it is.

when I look at the error it was clearly mentioning something about Dependency. so yes obviously my cluster is brand new. didn’t fine tune well because was bit hurry on deployment of SharePoint.

So it’s all about Configuring Dependency from Windows cluster.

generally SQL prevents the creation of Databases on volumes which are not Dependency of SQL Server resources. So The point of having dependencies is to prevent situations where SQL Server comes online before the disk containing the data goes on line. Therefore the term “DEPENDANCY.”

Open Failover Cluster Manager –> Select your clustered application (SQL) –> Right-click on your SQL Server resource then click Properties –> Click on the Dependencies tab –> Click the Insert button to add an additional row, then select the shared disk that contains your SQL databases –> Ensure that all resources are required (there is an AND next to subsequent resources) then click OK.

The Following Illustrate the Resource Settings of SPLAB which is my testing environment. 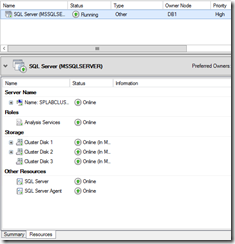 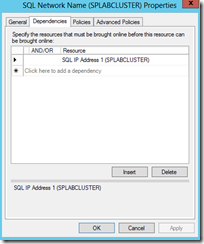 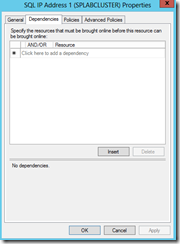 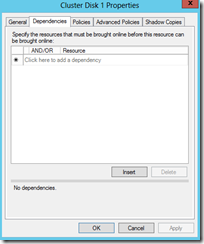 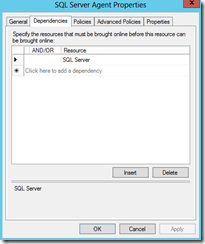 once all these added. you done !

just started of my very first Production SharePoint 2013 Deployment and suddenly got an Error saying that “Setup could not find any available products to install SharePoint 2013” when I ran the setup. All Prerequisites are perfectly gone and tried again to run by logging as local admin but still issue persists.

can remember that I had an same kind of a issue on installing Office 2013 first time and it was because of corrupted installer.

so guessed it would be same here, got the whole setup copied newly and then ran again, yes it worked !!

Wasted probably two hours by looking all around to find out the point of this occurrence.

So what else I have to huh ? None isn’t it ? But actually yes one more thing.

Suddenly popped out that one key permission which was missing while I’m checking – "Log on locally as batch job" on local security policy of SP Server. 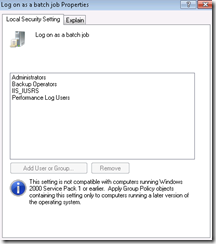 My farm account (Central Admin App pool account) should be here but it wasn’t. tried to add but couldn’t can you see the add users button has been grayed out so realized that Infra admin has defined this particular group policy through AD. 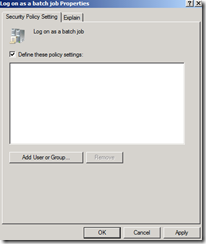 After applying just ran a GP Update/force from SP Server and checked whether this user has been added,

yes it was as above and then tried to open up the central admin. 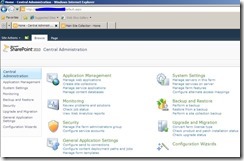 I’m a BIG FAN of Metro.so got some wallpapers for Metro Lovers out there. hope you’ll like them too…

An another significant feature dropped in SharePoint 2013. Sign in as different user no more available by default. this is one of the most frequently used feature in early SharePoint versions for Demonstration and testing purposes. as per Experts around “It has been removed from OOTB feature based on security considerations, specially on production environments“

however still it’s as simple as editing and adding few lines on Welcome page. here I’m stepping you to get it back but I would say it shouldn’t be done in PROD environments as Microsoft has dropped it reasonably.

2. Keep Welcome.ascx file originally copied somewhere and edit the original one through notepad and save it.

3. Add the following element before the existing element with the id of “ID_RequestAccess”:

go open up your sites and see. yeah it’s back in there.. Enjoy !

Yet Another very useful and free tool from Microsoft. If you remember the earlier version of this feature, it was an downloadable application where you can install separately but now with latest version of windows server 2012 it has been bundled in as a feature under roles and features.

I was heavily using iSCSI software target for my testing purposes where I needed an Virtual SAN such as on SQL/Windows Clustering etc.. I loved this because I got the real SAN Experience without any hardware or software cost. You can read my previous article if you are a pre windows 2012 user.

Note: This Tool only for Testing purpose and not recommended to propose for production environments.

Windows 8 Doesn’t Support this Feature anymore, you cannot install iSCSI software target 3.0 nor the ISNS server. This has been detached from client Operating systems.

Alright, Here is the scenario, I have two servers where I need this to be configured with.

Setup steps falls in to two levels as

So Let’s get configured this server. 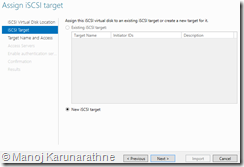 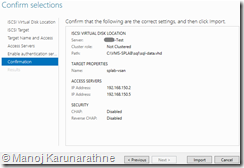 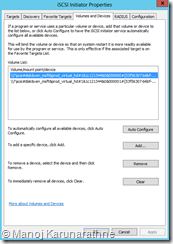 So it’s ready to play with and up to you. will be back in Clustering part with another post 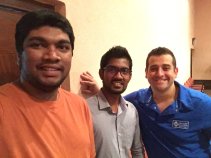 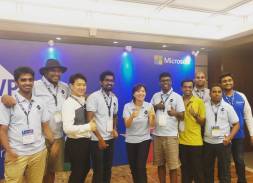 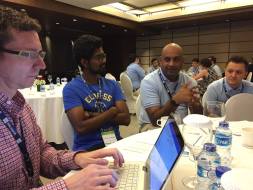 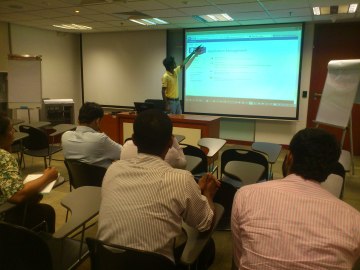 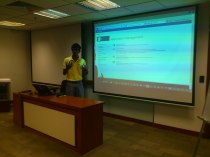 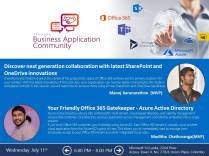 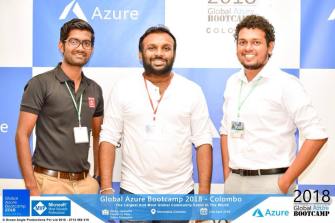 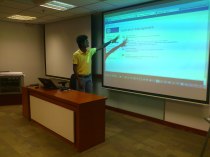 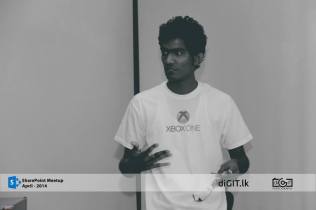 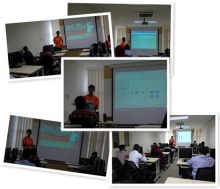 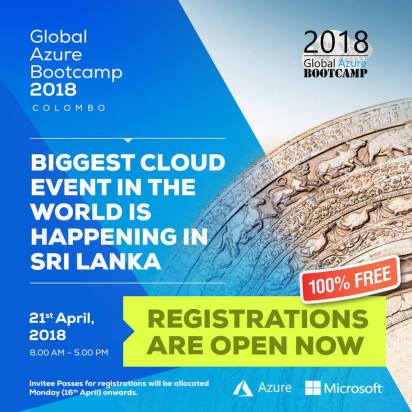